At one point, the group observed a striking yellow-and-black beetle laying eggs on a decaying birch stump. A parasitic wasp appeared to be following it, also laying eggs. Richard Saul took some photographs, which were passed on to experts for identification. 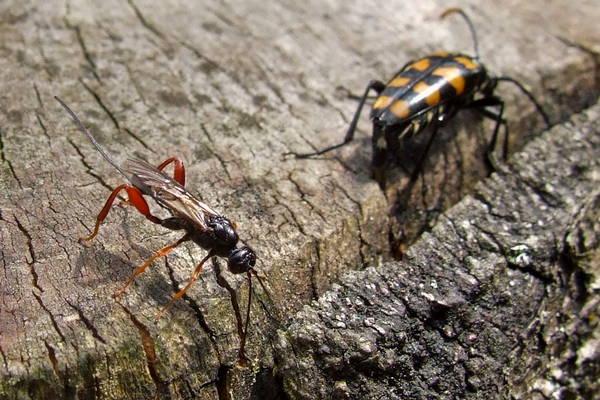 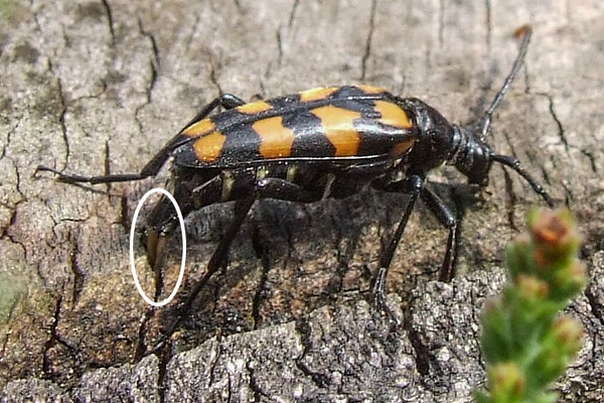 The beetle was quickly identified by Steven Falk of the Warwickshire Museum as Leptura quadrifasciata (previously called Strangalia quadrifasciata), the Four-striped or Four-banded Longhorn, a longhorn beetle already recorded from the Park. The wasp proved more difficult, but was eventually identified as Helconidea ruspator by Gavin Broad, the hymenoptera specialist at the Natural History Museum, London. 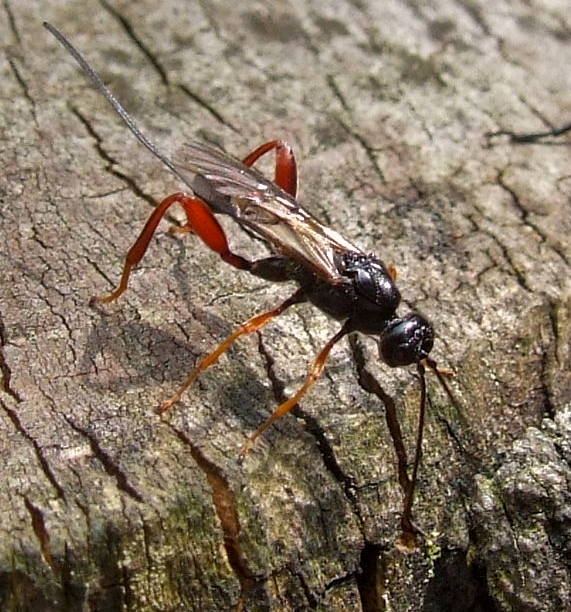 Helconidea ruspator is apparently very rarely recorded; the Natural History Museum have only one recent specimen. There were no previous records from Sutton Park of the family (Braconidae), let alone the species itself.

Mike Bloxham discovered some interesting information in Rev. T.A. Marshall's "Monograph of British Braconidae" (Transactions of the Entomological Society of London, pp. 149-211, 1889). Marshall records the breeding of H. ruspator (then called Helcon ruspator) from a larva of Leptura quadrifasciata. So it seems likely that the wasp was either attempting to place its eggs near the eggs of the beetle, so that its grubs could parasitize the emerging beetle larvae, or that the stump had already been used by other Leptura quadrifasciata individuals and the wasp could detect the larvae.

There's a photograph of a different species of Helconidea laying eggs (ovipositing) here (link correct as of June 2019).

Solitary wasps, such as Helconidea ruspator, are hymenopterans, i.e. members of the Order Hymenoptera, which includes bees, wasps, ants and similar species. About 6,500 hymenopterans occur in the British Isles. Of these, many sawflies (Sub-order Symphyta) and ichneumons (Superfamily Ichneumonoidea) are superficially similar to Helconidea ruspator. Identification of most hymenopterans is a highly skilled task, often requiring a microscope.

There are said to be about 3,000 species of ichneumon wasp in the British Isles, of which about 1,000 are brachonids (the family to which Helconidea ruspator belongs). It's almost certain that more brachonids would be found in Sutton Park if an expert carried out a survey.

After this event was reported in the press (see below), a number of people sent me photographs or showed me specimens which they thought might be Helconidea ruspator, although none were. An ichneumon wasp called Pimpla rufipes (synonym P. hypochondriaca) seems to be common around houses in Sutton Coldfield in the autumn, and was regularly mistaken for Helconidea ruspator. However, in this species: 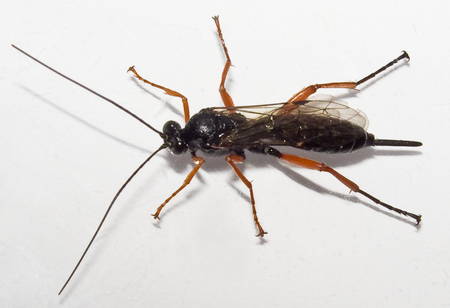 Reports of this event